Ok, now that’s I’m gearing up for MAGFest again, I can at least tell everyone right off the bat I most likely won’t have a full MMO Grinder episode for the next due date. But as I said before, I’m not going to neglect any forms of content, and no, an Off-Week Update doesn’t count as “content.”

In past episode news, let’s go over RaiderZ, which actually had a fairly pathetic showing. I guess people only care about games like that when they are brand new. I’ve been hearing a LOT of people tell me that I “forgot” to mention the lag in combat… Well, I “forgot” to mention that because I never experienced it.  I do forgot a lot of my audience isn’t from the U.S.,  and some games, especially action heavy ones, tend to be more unresponsive to those playing overseas. It makes sense, but why one would IMMEDIATELY draw the conclusion that the game itself is laggy baffles me. I never had a problem with it, and I didn’t think it was a big issue. In general I thought the game was fun, and had no idea so many people took issue with it. A few others also blame the lack of attention apparently being paid to Rusty Hearts on the fault of Perfect World focusing it’s efforts on RaiderZ. I… I don’t know, but that does remind me that RH is overdue for a Backtrack.

I AM comfortable enough talking about the response to the Mechwarrior Online review, seeing as how there’s really only two major talking points I’ve noticed.

1.) I hate when I draw a conclusion from an explanation, that’s not inherently wrong, but still not correct. To put it another way, when it comes to the crosshair system, I was wrong for the right reasons. In the review I stated that the “circle” crosshair reticule is assigned to your energy and ballistic weaponry, while the “cross” crosshair is assigned to your missiles. While I was not technically wrong in pertaining to the mech I was driving, the reasons weren’t correct. (Those watching it now will note I’ve since amended it to explain it better) The circle is your “arms” crosshair, and in many mechs, the weapons I stated are attached to your mech’s arms, while the cross is your “torso” crosshair, and you guessed it, it usually contains your mech’s missiles. The problem is not ALL mechs have arms, nor necessarily follow this pattern, and it’s possible to have a laser or gun hardpoint available on your mech’s torso, meaning that you would need to aim the cross, not the circle, in order to hit with those weapons. Again, a slight and not entirely incorrect confusion on my part, but still something I felt I needed to amend in the video.

2.) Man, this is turning out subjective as hell. I stick by what I said, the trial mechs are terrible. They overheat when you fire more than twice. They seem completely incapable of causing any real damage to paid mechs, and they get blown to smithereens in mere seconds of being fired upon. I will restate this again: I tried the Trial Dragon-DRG-5N and the paid version of THE EXACT SAME MECH. I died quickly in every single match I played with the trial version, and my first foray into battle with the paid version which, again, I accidentally made WEAKER by screwing with the hardpoints, was getting fired upon by 5 seperate enemy mechs when trying to capture a base, and I STILL didn’t explode right away, and was able to maneuver into a more covered spot before finally being taken down. I am really starting to wonder about those who honestly claim there’s “nothing wrong” with the trial mechs, or that they are even good. What I HAVE noticed, is a LOT of those defending the trial mechs are Founding players, who seem to be really into the game. A common defense is “If you know how to use them, they’re really good.” Yeah, that’s the problem…. We don’t know how to use them! We are new players! If you’re going to place in a mech for beginners, you don’t give them something that requires a lot of skill to use even remotely effectively, and toss them into a match with a bunch of vets. That’s BROKEN. To cross example, I died seconds into my first ever match playing MechWarrior. I tried out another mech game that people have been suggesting to me, and this was the result of my FIRST match (Free-For-All Deathmatch, mind you) in a LEVEL ONE, “Starter” mech, while up against other players as high as level 12: 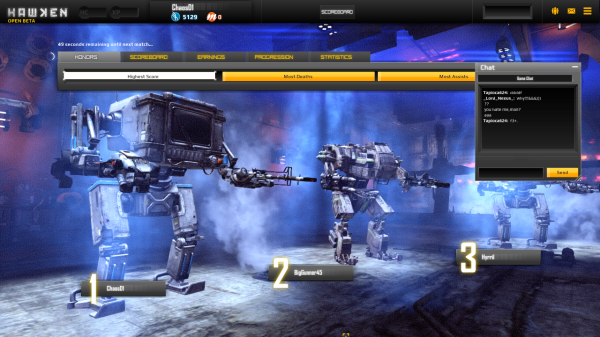 Yeah, I may have been driving a mech that looks like someone stapled arms and legs onto an Easy-Bake Oven, but I was taught how to use it, and it held its own.

Now before you use this as a “GRR HAWKEN STUPID! MECHWARRIOR IS 4 TRU SKILLZ!” jump-off point, which seems to be becoming an increasingly popular topic in the vein of DOTA versus LoL, my point is not to claim one game is a “better game”, but that this sort of thing CAN be done without screwing over your new players. I can also easily use World of Tanks as an example. Tier 1 tanks might be slow-moving Papier-mâché water-pistols on treads, but at least you’re only matched up with OTHER slow-moving Papier-mâché water-pistols on treads. Everyone sucks EQUALLY, and you get to spend what you’ve learned on better tank gear, while still learning the basic mechanics of the game with a fair shot.

The debate may rage on, but I stand by what I said: Trial Mechs are worthless. They serve little purpose in helping a new player play the game.

In a final bit of “OH DAMN IT!” news, I was going to do a quick Backtrack on DarkBlood, reporting on the Thief class, and the newly implemented fishing system, but without any logical or stated reason, it seems Outspark has decided to close DarkBlood on January 15th,2013. Despite the easily miss-able statement about looking for a new publisher, this seems set in stone, as the cash shop was removed yesterday, and Outspark is offering a “Complementary” bonus pack for Fiesta, by entering the promo code “BESTFANEVER” on their website. This saddens me as I KNOW how shameless the game could be (the Thief class is a loli, BTW) but it was seriously the most enjoyable beat-em-up MMO I’d played in a LONG time. There’s no “fan petition” to save this one, and whilst again, this came out of nowhere, as the game was heavily populated, and fan speculation is once again all over the place, the game isn’t exactly well known enough to warrant reporting on any efforts being made to save it. Because there are none. Happy new year, indeed.

Keep an eye out for a new Sidequest coming soon, a “end of the year” article I’ll have up, and some new Backtracks coming in the near future! If you are heading to MAGFest, keep an eye out for me, or attend the Blistered Thumbs Panel to see me there.

Leave a Reply to It Is I Cancel reply