Well, we’re finally here in many ways. Episode 100 (and for those of you paying attention, the real episode 100 passed months ago but whatever, it’s ceremony.) will be on Secret World Legends the weird reboot of what became my all time favorite MMO. So it’s up to me to start my character anew, and hope the game has a brighter future with the revamp in tow.

So I’m bringing back something I haven’t done in a LONG time. The “Open ‘Beta-Tester’ Event”.  Previously done during ArcheAge and Trove, the Open Beta Tester Event allows anyone who views MMO Grinder the same access to my Patreon Perk known as “Beta Tester”, a $10+ a month tier which grants access to a script so you can watch and even contribute to it in real time.

Now, in order to keep sanity, there are a certain set of rules I ask you to follow if you participate. The script is already under certain precautions, but if you wish to contribute in some way, here’s how to go about doing it.

If you have read and agree to all of this things, click this link right here to find access to the script. Please join us in Discord to discuss things live as we go over the game, and of course, make sure to stop by the stream.

Keep in mind that partaking in the event doesn’t guarantee you a spot in any grinding group with us directly. Form your own groups and opinions as you play, and all will be considered when we start organizing our thoughts together. Otherwise, join the Discord, log into the game, join the guild and have fun. (Or don’t, and have fun complaining about it!)

Posted in Miscellaneous, News and Updates

For those of you who missed the end of the Dead Island Epidemic video, we are running another Open Beta Tester Event, similar to what we did with ArcheAge.

For those not aware on how this works, an “Open Beta Tester Event” is when I offer up the “Beta Tester” Patreon Perk to all players who join the Grindstone community, (registering at the boards, and joining the Raidcall.)

As a “Beta Tester”,  you will gain access to the scripting process via a Google Doc that can be commented on, and added to. For example, say you’re playing the game being reviewed, and you see the script says something that’s not correct, (Like it reads “You can’t group with enemy players.” when you can group with them under certain conditions.) you can add a comment to that line and update the information to discuss it. You can also add your own personal experiences with the community, or just sit idly by as the notes and script appear so you’ll know what’s being said about the game before the video is ever released.

For those who wish to join us, head to this thread on the forums, and remember that unless you’re registered to the board, you won’t be able to view it. In this thread you’ll find all the info you need to join us, as well as a link to the Google Doc so you can join the event proper!
http://mmogrinder.boards.net/thread/269/open-beta-tester-event-trove

Posted in News and Updates

Week 2.
I no longer remember my human name.
We’ve been losing our crew as the days go on. Those of us who’ve managed to survive have endured hardship after hardship. One of our crew was left so broken and battered, we though we lost him, but he managed to recover at a great loss to his sanity. We endure, but not without a loss of our souls.

What a damned adventure this has been, eh guys? It’s not too late to join the Open Beta Tester Event in ArcheAge if you so desire! If you’re not on board with our crew during this event, remember you too can test your mettle by going here: http://mmogrinder.boards.net/thread/230/archeage-open-beta-tester-event
Remember to register for the boards, or that link will lead to an error page!
Most everyone in the guild is a different style class, and we don’t find ourselves “needing” any one specific thing, so feel free to roll whatever you desire. We just highly suggest it be some form of mage or archer. For your sake.
We have a few upper level characters, we want to murder everyone, and regular trade runs are happening as we speak.
Feel free to add anyone on that list to your friends list with “Shift-V” to see when we are online, and get yourself an invite to the guild.

Speaking of the guild, or the MMO Grinder community-at-large we call “Grindstone”, we have a symbol now! Check it out below!

It’s available with or without the added text. You might also notice that default avatars on the forums are now this image.
If you’re thinking, “Man, that would look awesome on a t-shirt!”, well, so was I! Here’s the link to the image on a shirt at Redbubble! Available for purchase whenever!:
http://www.redbubble.com/people/mmogrinder/works/12764279-grindstone-logo

That’s not the only new shirt to grace the MMO Grinder store, as my commission of Ciann a few months in the making is finally complete. While the original intention of the image was to replace the WoW poster behind me, I thought the image was so cool that I included it in the Redbubble store as well. Artwork by Andarix 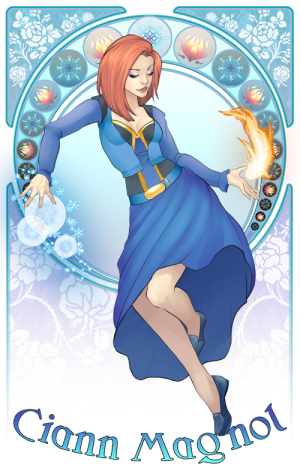 Also, don’t forget to vote in the Halloween Poll! Even if you’re already voted, there’s a week long “cooldown” on the voting process, so you’re free to vote again if you haven’t done so since it first went up. remember the poll expires on the 13th, and the winner WILL be the Halloween episode for this year.

Posted in News and Updates